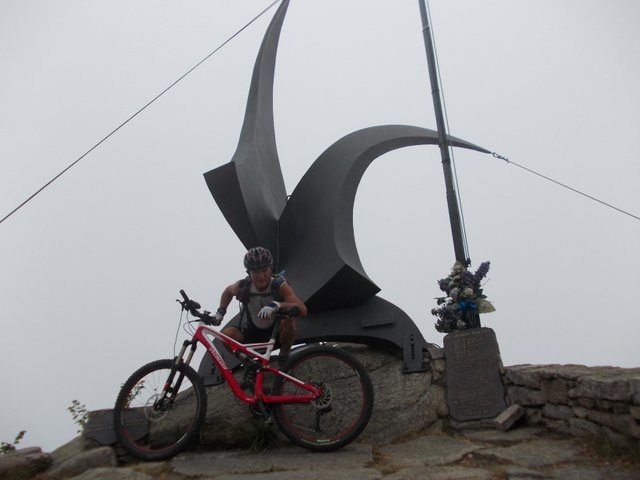 Start from the square in front of the Municipal building, 367 meters high. Proceed on the street Via Duomo until the Carabiniere barracks, take Via Fenestrelle in correspondence of the traffic light, go on and pass by the traffic light nearby the hospital Ospedale Cottolengo and the stream Lemina. Then turn right in the street Via Tiro a Segno and run in so doing out of the car traffic. When arrived at a pilone, the so called “pilone delle Mollere”, 400 meters, turn left and begin to climb some quite difficult ramps: there is no possibility of getting wrong. After having reached via Priolo go right and keep ascending until a statue called “del Redentore”, 640 meters; go right, and soon after the black-topped road comes to an end. Continue until a crossroads, here go left along a brief but very steep ramp, at the limit of ciclability. Without leaving the main way, go through some up and down hills and arrive at the fountain of the Alpines at about 6.5 km and 745 meters. Here take the dirt patch which goes right: by a slope which is never too demanding reach the small hill Colletto Belvedere. A very quick digression on the right can be made in order to reach the top of the Belvedere and the statue guarding the spot, about 1000 mt and 9 km. Once you have returned to the little hill descend until the hill Colle Pramartino, 920 meters, continue on dirt patch straight on towards Nord and in 7 kilometres of beautiful beaten path arrive at the hill Colle del Crò, about 1165 meters and 17 kilometres. After having breathed again, go behind the trattoria looking for a dirt patch which climbs down: there is a bar closing the dirt patch itself, opened only to nesters, pass by it and continue following the way until the hill Colle Colletto, about 1340mt and 21 km; go left descending until the hill Colle Pra l’Abbà, and here go right towards Colle Sperina. From this moment on the way is not a cycle one any longer: wheel the bicycles and follow the mule track leading to the summit of the mountain Freidour, 1451 meters. Now, with no possibility of getting wrong, proceed along the path, which is entirely signalled: it is cycle lane for its most part and leads to Colle Aragno West. Now you have to wheel your bicycles, also during the descent, paying a lot of attention, until the new Pinerolo’s CAI refuge, the splendid Casa Canada set in the place of the old hut Melano. After having rested and taken refreshment, follow the path leading to “Colle del Ciardonet”. From the Hill keep going along the crest and proceed towards the wood “Bosco dell’Impero” passing for the hill “Colle dell’Eremita”, 960 meters. After about 100 meters take the path of the coal-cellars on the right, really technical, climbing down until the hamlet Borgogna, few meters of asphalt and go left on a path with a brief re-climbing during which bicycles have to be wheeled, then entirely cycle lane. Leave it in correspondence of the hamlet Divisa, turn left and head towards Colle Infernetto, before the hill turn right and take a very technical but cycle path come out on dirt patch leading quickly to Costagrande. At the ex trattoria of Costagrande turn right and end up in Colombaro, Pons and Bacchiasso then on cycle line leading briefly to Pinerolo in order to complete this track.