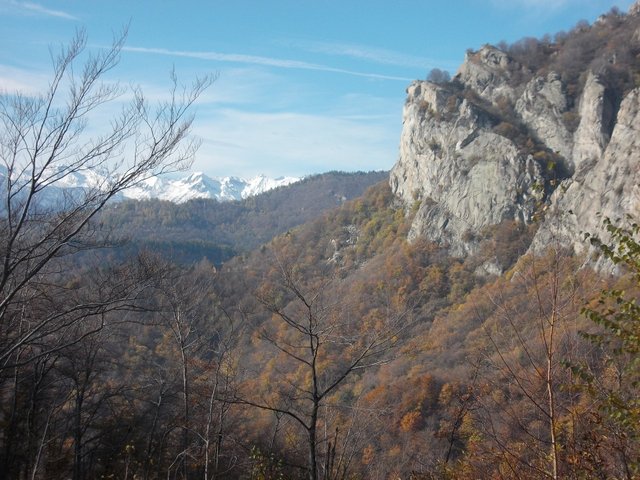 The starting point is in Pinerolo in front of the railway station, m. 367 high. Proceed in the direction of Roletto and Cantalupa choosing the cycle path or passing for Monte Uliveto. From Cantalupa go on towards the hamlet “Borgata Coassoli” and then San Martino; when the path goes right ascending until the hill “Colle della Bessa” and the mountain Monte Tre Denti, we leave it and we go left overpassing the stream Torrente Nocetto. Immediately after, there is a crossroads with a dirt patch going left: proceed on the right, you cannot get wrong; the path has some extreme stretches at the limit of ciclability and reaches the small hill “Colletto Costellar.” From here we strongly suggest to climb until the Rock. Having returned to the small hill, continue on the road until its end and then, wheeling your bicycles, head toward the hill Colle Aragno-East following the red and the blue signs accurately. Once you have reached the small hill Costellar, the only possibility is to follow the crest leftward (West), still wheeling your bicycles and riding for some brief cycle stretches alternately. The crest will lead us to the highest point of the ascent, to say Monte Freidour, 1452 meters high. After having rested back in the saddle a very technical descent (OC+) leads to the hill Colle Sperina, 1302 meters high. Now follow the signs for the Hut and with another not cycle descent (but it is known, every saint helps in descending), arrive to Casa Canada. So it is possible to take refreshment. After having regained energy, take the path leading to the hill “Colle Ciardonet” and after follow the path of the coal-cellars up to the hill “Colle Eremita”. Now take an old mule track climbing down to the intersection with “Rocca Lavoira” and “Fontana Cauda”. Continuing to follow the red signs with great care, arrive at the tiny street and passing for the Fontana reach quickly the blacktop of the hamlet “Borgata Scrivanda”. After few meters of asphalt go right crossing over on a bridge, begin to ascend again on dirt patch until the houses Baronera and after on a mule track, still cycling street to the hamlet “Borgata Vautero”. On black-topped road return to Pinerolo passing for Costagrande and descending first to San Pietro and then to Pinerolo, bringing to a conclusion this demanding maillon.

NOTE: Very demanding tour, because of the difference in height as well as because of the portage, it needs training and motivation in what concerns the research of new trails, otherwise it translates into a failure and you will not be able to admire the wild beauty of the places you walk through.