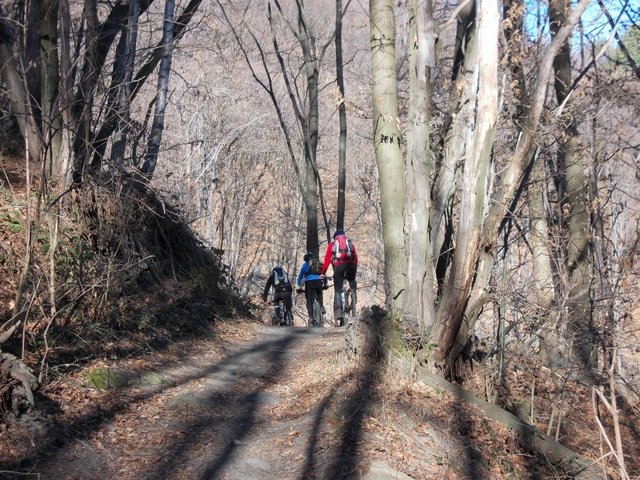 The starting point is Pinerolo, from where you can climb until the Hut by one of the multiple paths: by the cycling lane going toward “S. Pietro Val Lemina” we ascended until the crossroads, where we turned left in the direction of the former ornithological park, riding off the traffic. Climb until the street S. Antonio, that you will find on your right, take it and go on until the crossroads; here go left on black-topped street towards the ex community “P.G. Frassati”. Take the cycle path starting nearby the ex community: some extreme ramps have to be faced. Continuing to follow the main trail reach the paved street which climbs from “S. Pietro” to the hill “Colle Pramartino”, ride for about 300 meters (still on blacktop) and then take another dirt patch on the left. Little after you have to wheel your bicycles (for about 10 minutes), due to the uneven pavement because of motorbikes. Take the dirt patch coming from the fountain of Alpines, turn right and you will soon arrive to “Colle Pramartino”. Here follow the beautiful dirt patch leading up to the hill “Crò”, where you have to take the path proceeding towards the hill “Colle Ciardonet” and getting through the hamlet “Cossulera”. At the “Ciardonet”, before going on for Casa Canada, we strongly suggest you to restore your strength. After the break, you have to proceed in the direction of “Colle Aragno”-West by a route which is NOT cycle path: arrive at a crossroads where you will see two arrows on a stone (they indicate to go right), just take it (still NOT cycle path, with the exception of some very brief stretches fit for the best trialists). The street is entirely and accurately signalled. It takes about 30 minutes to reach the small hill Costellar, where it starts an entirely cycle road descending towards Cantalupa (from Cantalupa it is possible to return to Pinerolo by cycle lane). When we arrived at the crossroads, 700 meters high, we turned right, climbing again; again there are some very steep ramps. Venture into the small valley “valle del Noce” until you reach the altitude of about 900 meters; from here start to descend until the crossroads with the path “Fontana Cauda”. Climb down on paved road until the houses “Scrivanda” and little after (if we are still “get-up-and-go”) turn right, cross over on the bridge and start a new ascent until the houses “Vautero”. At this point there is a new possibility to return to Pinerolo on paved road; but we (unsatisfied) went right on a dirt patch which crosses hereinafter the path DVB rising to “Rocca Vautero”, with a final portage of about 20 minutes, until arriving underneath the Rock. The last step consists in descending towards “Costagrande”, and return on the cycle path you took at the outward voyage in order to complete this wearing but spectacular and enriching tour.

NOTE: Spectacular tour, especially in these periods, very complex and wearing. It is the worth to try it even if it is necessary to wheel the bike along some stretches, consider that the portages are never very long. But as it is known, without a bicycle it is not possible to do research on-the-spot, and without research, the tours are always the same! In so doing you stay on the safe side.