Rocca Sbarua, also known as “Rocca Bianca” (White Rock), is located 1241 metres above sea level and looks directly out onto the land above the residential areas of “Cantalupa” and “Roletto”. It belongs to the highland which encloses the “Val Lemina” valley and that connects “Val Sangone” and “Val Noce” valleys, the rocky hogback which lays in the direction NE-SW and whom main summits are: “M. Sperino” (1451 m) “M.Freidur” (1445 m) and “M. Tre Denti” (1343 m).
Geologically, this rocky terrain belongs to the range of Dora Maira and is made up of monzogranites and augen-gneiss created by the magmatic intrusions of the Permian Period (299-250 million years ago). The range of Dora Maira takes its name from the two streams which delimit the area where it raises, and it represents the Paleo-European pre-Triassic continental crust (260 million years ago). 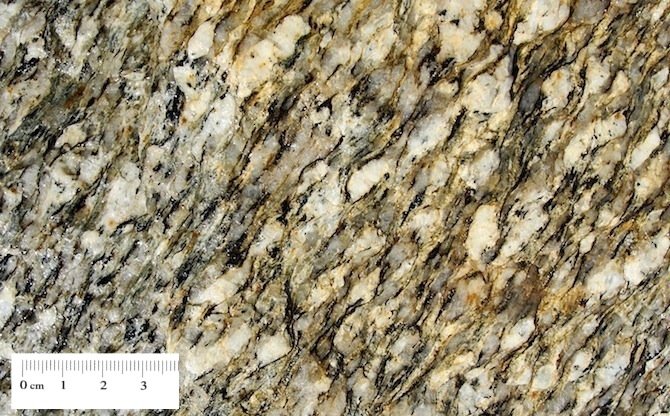 Indeed alpine orogeny is caused by the collision between this continent and the Paleo-African one; geodynamic forces have in the course of time given initially birth to the divergent drift of this continent from Paleo-Africa, leading to the formation of the Ligurian-Piedmontese Ocean (140 million years ago), and then, with the inversion of the forces, to the convergence of the two plates (100 million years ago) and to the resulting alpine orogeny. Therefore these rocks have gone through multiple variations of temperature and pressure, changing their mineralogy and their aspect; in particular, the area where Rocca Sbarua stands is the result of the transformation of acid intrusive granite stones.

In greater detail, the rock is a biotite granite leucocratic glandular augen-gneiss with micro-pegmatite tendency; in the picture we can see the k-feldsphatic coarse-grained “eyes” and the black biotite lamellae.
This kind of stone, whose characteristics are similar to the ones of granite, from which it derives, gives rise to vertical walls, to fractures and notches systems, resulting from the cooling down and from the reduction of the vertical charge consequent to the raising and the outcropping. Even the typology of rock climbing is similar to the one practiced on granite, availing of locks and of lay-backs; at last notice the remarkable asperity of the rock, due to the porphyritic crystals of the more resistant minerals which, being less erodible, stick out on the rest of the rock giving it the appearance of a grater: bring your camera with you!