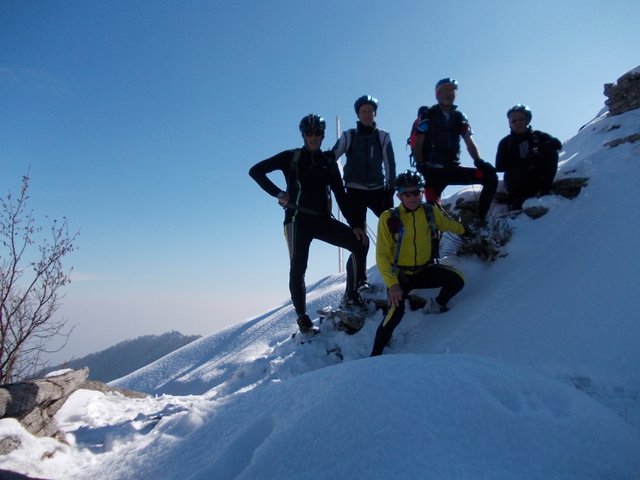 The starting point is in Pinerolo in front of the Railway Station: reach Roletto and then Frossasco, where the ascent towards Bianciotto Borlera and Pero starts, a mixed itinerary including roads and mule tracks and which can cause some difficulties in orientating: it might be better to have a GPS in order to keep track. Proceed toward Vigna, Spirito, Marchettoni sup. and San Martino. After having passed the stream Torrente Nocetto crossing over on a cement bridge, at the following crossroads go right on a very steep dirt patch and proceed until the sign on the right signposting “Monte Tre Denti”. Leave the bicycle and set forth on the path which passes for the small hill Ellena and for Fontana Ellena and leads to the hill Colle della Bessa, 1170 meters high. Here turn left (West) and following the white and the red signs, with no possibility of getting wrong, arrive at the chapel of the mountain Monte Tre Denti, 1342 meters high. Breath-taking panorama. Now descend backwards until the bicycles, and start to climb again arriving at the small hill Colletto Costellar. Altitude 1080 meters high.Descend now along the trail of the path which leads to the hut Rifugio Melano Casa Canada until the altitude of about 950 meters; hereafter on the left there is a long standing dirt patch, cluttered with leaves and branches (nobody has passed through it for 1000 years): leave the path and begin to climb down following this trail, of more difficult ciclability at the beginning but gradually enhancing. It takes little time to reach the dirt patch which comes from Cantalupa and climbs down until the crossroads, where you go right, and which leads hereafter to fontana Cauda then to the hamlet Case Scrivanda. At this point it is possible to choose if ending the tour or going left on dirt patch with an easy ascent, as we did, and go on passing through Case Sartas, Case Bianco, Doirino, Ghiot, then heading again toward Vigna. From here descend in the direction of Frossasco then Pinerolo.

NOTE: Extremely difficult and demanding tour, the ascent towards the mountain Monte Tre Denti over all; today there is a lot of snow, even remaining on the path, pay extreme attention during the climbing until the Chapel on the summit; the road leading to the hill Colletto Costellar is very steep, thus it requires a good physical training to be climbed: it is a dirt patch fit for those who love the difficult ascents! The descent from the Colletto is not that easy and it is essential to pay attention, especially today because there was the snow, few centimetres but enough to trouble. In any case it is the worth to try this trip, maybe in a better season , when the soil is devoid of snow and leaves.